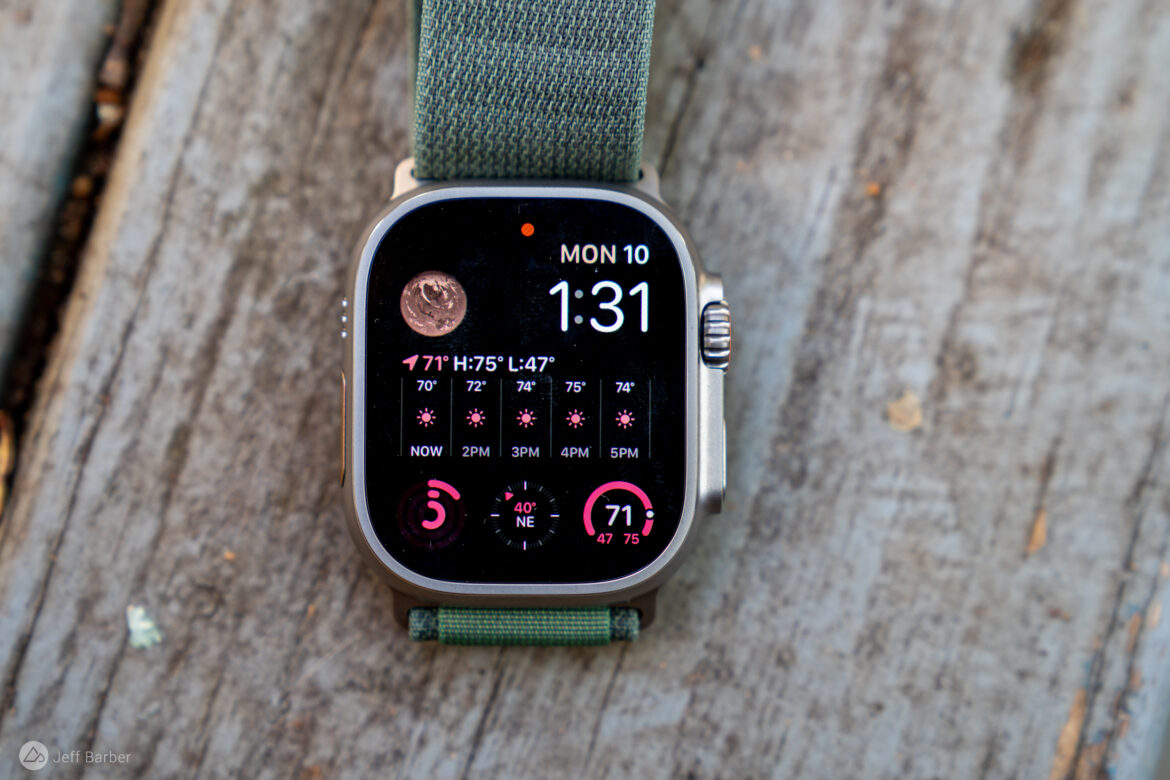 Last month Apple announced the first-ever Apple Watch Ultra with a feature set clearly targeting outdoor adventurers. Many wondered if it might be a Garmin killer based on its promises of longer battery life, highly accurate GPS tracking, and a rugged case made from nearly every outdoor adventurer’s favorite metal, titanium. I ordered one for myself to see how well it would work for mountain biking and while I haven’t had a lot of time to test, here’s what I’ve found so far.

The Apple Watch has been around for several years, with each series adding new features and capabilities. In addition to the Series 8 models released in 2022, Apple introduced a new line dubbed Apple Watch Ultra. Compared to the latest Series 8 watches, the Ultra adds a new “Action button” on the left side, an 86dB siren to use in emergencies, and a battery that’s said to last twice as long as the one featured in standard models. The Ultra is also more waterproof and has a slightly larger and brighter screen than the models that are less expensive by half ($799 for the Ultra vs. $399 for a new Series 8).

The rugged titanium case wraps around the screen for added protection, and the Ultra can be paired with more outdoorsy “Trail” and “Alpine” bands. Inside, the Ultra boasts upgraded GPS capabilities with the ability to utilize dual-band L1 and L5 GPS signals.

Like the Apple Watch Series 8, the Apple Watch Ultra features a bevy of wrist-based sensors including heart rate, body temperature, and blood oxygen. There’s also an altimeter, digital compass, gyroscope, depth gauge, and accelerometer. Apple packs two speakers and three microphones into the Ultra and of course it’s got Wi-Fi, LTE (cellular), and Bluetooth built in.

With the Alpine loop watch band, mine weighs 74.1g.

On the trail with the Apple Watch Ultra

I’ve been using the Strava app to record rides, and also the Apple-provided Workouts app. Most of the available apps are pretty basic given the constraints of the screen size; the Strava app, for example, doesn’t even show a map of your current workout. If you want to see where you are, you can flip over to a map app like Apple Maps or Google Maps. Unfortunately neither of those watch apps have topo or outdoor-themed map layers, nor do they have the option for bicycle routing. For that reason, mountain bikers will likely want to load an app like WorkOutDoors ($5.99 on the App Store).

WorkOutDoors basically does most of the things a dedicated cycling GPS can do. You can record rides, view a map of where you are and where you’ve been, share rides as GPS/FIT/TCX, and set heart-rate alerts for your rides. Most importantly for mountain bikers, WorkOutDoors lets you load GPX trail files from sites like Singletracks so you can follow them during your ride. Base maps in the app appear to be cached to some degree so you don’t need to have your phone with you for it to work.

I found the WorkOutDoors app does a decent job for trail navigation, beeping and buzzing whenever I got off the trail by more than a couple hundred feet. The Apple Watch Ultra screen is incredibly bright and thanks to its high resolution I was able to clearly see on the map where I got off track. The touch screen, in conjunction with the scrolling crown makes it easy to pan and zoom, which I’ve found is downright frustrating on other watches.

The other thing that makes trail navigation excellent on the Apple Watch Ultra is the built-in digital compass that keeps the map oriented at all times. Maybe it’s not just the compass, but also the fast processor inside. The map instantly responds to the orientation of your wrist, and the direction you’re facing.

The WorkOutDoors app doesn’t offer re-routes, and I haven’t found a way to create cues for trails either. Hopefully it’s just a matter of time before Apple or Google adds (road) bicycle routing to their map apps, or even better, the ability to navigate off a custom GPX file.

Audible alerts on the Apple Watch Ultra are among the best I’ve experienced on any outdoor watch. While most others are limited to beeps and buzzes, the Apple Watch Ultra has a loud speaker, and the ability to well, speak to you. I love how it announces splits during my runs so I don’t have to focus my eyes and steady my arm to see how far I’ve gone or how long it’s taken me. It’s easy to hear, even over wind and traffic noise, allowing you to keep your eyes on the trail or road.

While the Apple Watch Ultra gets an extra button compared to the standard version, I found the buttons don’t really do all that much; most in-app actions require using the touch screen. This is a real red flag for me, especially when it comes to outdoor watches. Gloves and sweaty fingers don’t tend to get along with touch screens, or so I thought. Based on what I’ve seen so far, Apple at least got things half right.

Pretty much any mountain bike glove you buy today will advertise touch-friendly fingers and thumbs, and in my experience these kinda work. On the Apple Watch Ultra, I would downgrade that to “barely works.” Surprisingly though, sweaty fingers work much better. Good almost. On-screen buttons are generally big enough to mash with a thumb or finger while riding. Still, it’s annoying that simple things like starting or stopping a workout can’t be controlled with one of the three (!) buttons on the watch. The touch screen is generally the only way to switch views within an app, or control functions within the app itself.

The Alpine band is comfortable enough, though I was skeptical of its rough texture at first. A metal hook slides into the webbed loops spaced around the band which Apple says is to make it easy to adjust with one hand, even when you’re working out. This is a great idea IMO; I’ve certainly found the need to tighten my watch during some particularly long rides. However, all those loops add resistance when you’re tightening the band. It’s a simple design for sure, but it’s not perfect.

While testing the Apple Watch Ultra I took a minor spill climbing around a tight switchback. My front wheel washed out and for a moment I thought I might tumble backward down the hill. Fortunately I fell into soft leaves on my side and immediately chuckled at my mistake. Within a few seconds the Ultra was vibrating and beeping, and had initiated a countdown to notifying my emergency contact. I tapped on the screen to indicate that I was fine which cancelled the emergency contact countdown. A follow-up message wanted to know if I had actually fallen, or if it was a false alarm.

That’s the only time fall detection has been activated so far, in spite of some rough riding, and harsh landings on the bike. The Apple Watch Ultra seems to do a great job distinguishing between normal mountain biking and actual crashes. (Though this week there are reports of the watch being fooled by roller coaster rides.)

One of the big knocks on previous versions of the Apple Watch is battery life, or lack thereof. The Apple Watch Ultra claims double the battery life of the standard version — up to 36 hours — with normal use. My brand new watch, fresh battery and all, seems to last about 48 hours on a full charge, which is a nice surprise. Apple says a low power mode is coming to the Ultra soon which will boost battery life up to 60 hours.

So what is normal usage anyway? For me that means either a run or a ride (or two!) every day, a normal amount of notifications, and checking the weather. The Apple Watch Ultra automatically measures heart rate and steps throughout the day as well. I’m not one to track every commute or stroll to the store, but the Apple Watch makes it easy by sensing when you’re riding a bike, or walking somewhere. If you forget to start a workout the watch asks if you’d like to record one. Accept, and it rolls in the distance you’ve already covered, and counts the ride toward your fitness goals for the day. In my experience this feature works exactly as advertised, though there’s no easy way to see a lot of detail about your Workout app recorded rides.

I used 90% of the battery in one recent 48-hour period, at which point the watch reminded me to plug it in. Charging goes pretty quickly, though for serious data-holics missing even just a few minutes of heart rate tracking leaves an incomplete record. I do like that the watch sends an alert to my phone letting me know it’s fully charged so I can get it back on my wrist right away.

GPS accuracy has improved a ton over the years, so much so that the standard track test isn’t much of a challenge anymore. In my 1-mile test, the Apple Watch Ultra reported a distance of 1.004mi. That’s off by just 0.4%, better than any other GPS I’ve tested. Honestly now I’m wondering how accurate my riding is during these tests. There’s a good chance that I’m the error.

Just as impressive is the Apple Watch Ultra elevation tracking. Looking at the chart above you can see how sensitive the watch is; it’s basically reporting elevations down to the inch. Given the regularity of the peaks and valleys I wouldn’t be surprised if this is actually showing all the minor dips and bumps around the oval each time.

Now, it’s possible the watch and/or the Strava app are recognizing this as a track workout, and correcting the data either on the fly or in the cloud. Apple says the ability for the Ultra to detect track workouts is coming soon, and it’s not clear if that will apply to just running, or cycling too.

Out on the trail, the Apple Watch Ultra accuracy and precision turns in mixed results. One of my local trails is notoriously compact and full of sharp turns, though it never actually crosses over itself or doubles back. As you can see from the traces above, the Apple Watch Ultra captures more of the route detail than the Garmin Edge 530 GPS, and it reports an extra 0.8 miles of distance that the Garmin misses. However, the map also shows the trail intersecting itself in many places, which is not accurate.

This particular trail has changed a bit over the years, and the last time I measured it with a wheel-based sensor it was two miles long. On this ride, Garmin said the trail was 1.5 miles long, which isn’t bad (some units I’ve tested only report it’s as short as just one mile). The Apple Watch Ultra overestimates the trail length at 2.3 miles long.

Bottom line: If you’re a core mountain biker looking for a trail watch, you’ll likely want to stick with a dedicated outdoor device from a brand like Garmin or Coros. If you want a high-tech watch to wear 24/7, the Apple Watch Series 8 may be a better choice than the Ultra since it offers most of the same useful features for mountain biking, but at half the price.

Pros and cons of the Apple Watch Ultra.

Jeff Barber
Jeff co-founded Singletracks.com with his wife Leah (mudhunny) in 1999. Today he works out of Singletracks World HQ in Decatur, GA as the Editor in Chief.