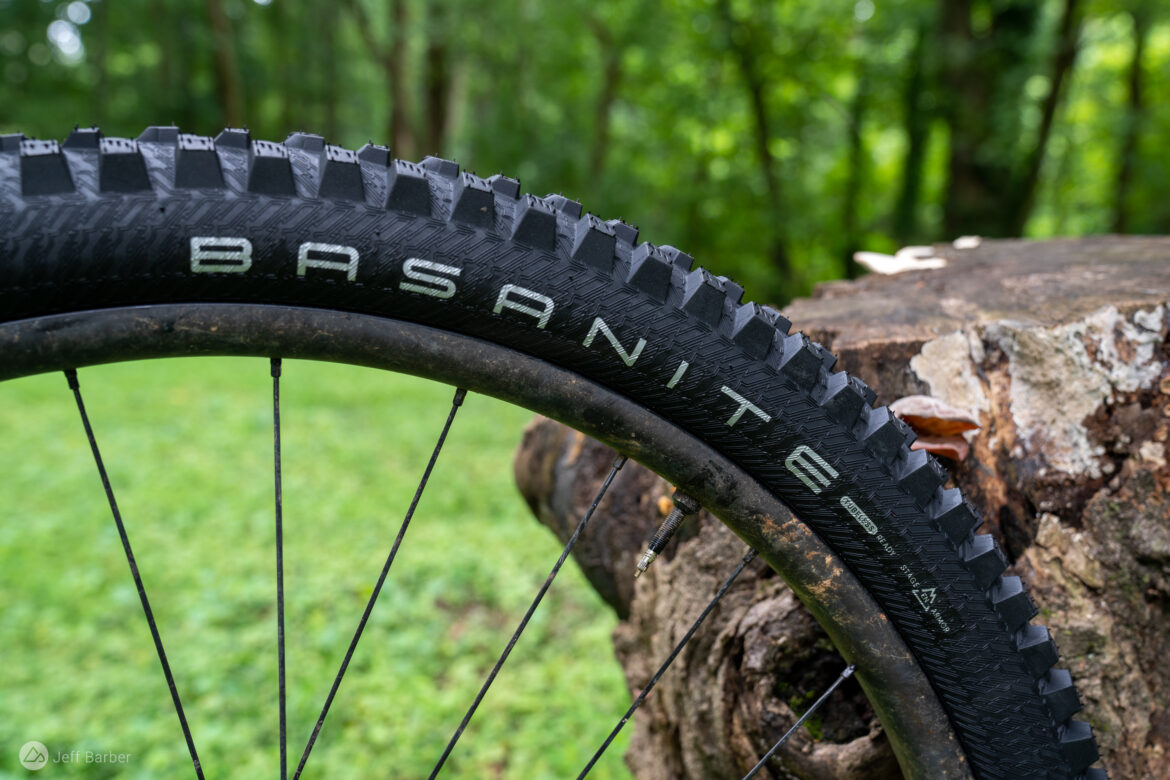 It seems tire brands have finally received the message: Mountain bikers want grippy, tubeless tires that can stand up to abuse, and we’re willing to pay a bit of a weight penalty to get it. The new American Classic Basanite tire certainly fits the bill, and it seems the brand did their homework before jumping into the increasingly crowded MTB tire field.

The American Classic Basanite is available in 27.5 and 29er diameters, both 2.4″ wide. It’s a directional, rear-specific tire designed for most conditions, and is offered in either a trail or enduro version. I’ve been testing the enduro construction, dubbed Stage EN Armor, which features two layers of 120tpi casing and three tire compounds “for enhanced damping and slow rebound.”

American Classic says the Basanite is at its best mounted to rims with a 30mm internal width. I tested mine on slightly wider, 32mm rims and found the tire measures 59mm wide, or about 2.32in, which is short of the advertised 2.5-inch (60mm) width. Presumably a 30mm rim would make the actual width even narrower, though I’ve done enough of these tests now to know that in the real world, most tires end up measuring narrower than indicated. Maybe it’s time I get a new set of calipers.

Inside, the Basanite tires have a slightly raised, honeycomb-like texture while the outside of the tire is also textured. Burly ramped side knobs are matched with alternating blocks of tall center knobs. My sample weighs 1190g which isn’t lightweight territory by any means.

I didn’t have any problems mounting the Basanite on my Reynolds carbon wheel. It went on without a tire lever and aired up with just a floor pump and a generous amount of sealant. For my tests I ran between 12-18psi.

I’ve been running the American Classic Basanite as a rear tire for about two months this summer in conditions ranging from dry to wet, and from hardpack to loose. The tire works particularly well in loose conditions thanks to the widely spaced knobs that dig deep to find traction. I found it sheds sticky, clay-based soils well too.

In terms of braking traction the Basanite is great, barely stuttering or losing grip on smooth surfaces like exposed rock and rock-hard hardpack. While the compound on the center tread may not be as soft as the side knobs, it was plenty sticky in my tests. The triple-compound construction seems to be working as intended with relatively even wear across the tire after a couple hundred miles of riding.

The Basanite transitions well between the center and side knobs. In the corners the tire performs ok, feeling a touch squirmy when leaned in either direction. While the side knobs are plenty soft and tall for max grip, the sidewall support seems to be a bit lacking despite having two layers of 120tpi casing. The good news is the double ply casing has proven plenty durable with zero pinch flats or burps despite riding miles of jank and countless hucks to flat.

Climbing traction is good as well. The rubber compound grips well on dry rocks and roots while the tall, angular knobs get the job done on loose and greasy steeps. It seems like the textured casing in between the knobs even adds a bit more traction in the wet once the siped knobs bend and slip out of the way.

The American Classic Basanite feels draggy when it’s time to pedal, and clearly this isn’t a low rolling resistance tire. The weight of the Stage EN Armor construction takes extra effort to spin up and the big knobs are extra buzzy on smooth surfaces. The upshot is the tire stays planted at all times for maximum traction.

Bottom line: The American Classic Basanite is a solid rear tire that most trail riders will appreciate thanks to its durable construction and well thought out tread pattern. It’s not a lightweight or fast rolling tire but at $50, it’s priced right.

Pros and cons of the American Classic Basanite